What Annoys Me … #6 Writing Texts in Word 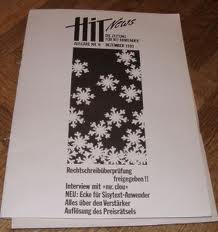 At one time, we at InterFace also wrote a text system. It was called HIT and powered by CLOU. It was a truly great software and a huge success. The HIT turned into a true hit, because it was simple and easy to use. And there were the CLOU components. They were an enormous help to the people as they did their work.
HIT, however, was not wysiwyg (What you see is what you get). Microsoft came and dominated the office world. Along with Windows, the graphic dislays became popular on a large scale. Now the users thought they all had to have a desktop publisher in order to write simple letters. Consequently, HIT had to go. And the world got Word.
I used to do a lot of programming. My favourite was “vi”. Today, I no longer write any programs. Instead, I write a lot more texts. However, I hardly use Word or OpenOffice these days. After all, there are so many simply editors. You get them on Linux, on the Mac or integrated into web applications. Then there is google. There is nothing you cannot do with google! 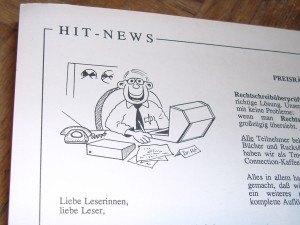 Consequently, I only take the pains of using a “word processor” (the very term is an abomination) when I need to be “process compatible”. And I hardly ever use that kind of software. An example would be if I have to write minutes.

Mind you, OpenOffice is hardly better than Word. The generic problems are identical: both tools can do everything, but nothing works perfectly. Word is not the only program that is painfully illogical in the eyes of a programmer.

Both tools are always good for surprise effects. You will easily get lost in a net of complexity the exit of which is sometimes hard to find without destroying your document.

What is it I dislike about it?

Having to write with Word or OpenOffice myself! Or having to watch others do it. More often than not, having to watch hurts more than doing it myself. Especially if I remind myself of all the work time wasted. I also find the cursing I hear from neighbouring offices after a ”Word Accident“ quite a nuisance. Because, again, the “word processor” has its own idea about what it wants to do, which is not identical with the user’s idea.

What do I do about it?

Whenever I have to work with a “word processor”, I use as few functions as possible. I do not take risks and avoid experiments. Neither will I create huge documents. I fight the mega tool with minimalism.

If I need a quick text, I mostly use the Mac TextEdit. I rather like HTML editors, for isntance the integrated WordPress editor. To be sure, it is not faultless, neither is it wysiwyg. But at least I have little trouble. I can formulate withouth much of an effort and I (almost) always get what I want.

Whenever I hear Word users curse, I do not listen. Whenever I see someone struggling with Word or OpenOffice, I leave the room and the victim to his or her destiny. This is how I also avoid actually saying all the cynical things that already form on my tongue. Even if it is hard to keep quiet.

I am a little nostalgic about no longer having the old tools. Even the much-despised “vi”, along with nroff and troff was a wonderfully logical tool. In those days, you could use them to create fast and precise document at unheard of speed. Even “doculitity” (is that how it was called?) in the BS 2000, supported by  EDOR or EDT (do you still know them?) were more efficient than Word and OpenOffice (which, incidentally, is no longer all that open at all).

TeX was and still is the most efficient tool for demanding diploma and doctorial theses. In particular, the use of TeX for preparing presentations or proposals would drastically reduce time and strain when you have to work big and elaborately structured documents. But the poor colleagues prefer labouring with Word and then having to spend an unnecessary night or an entire weekend at the office, just in order to win the battle against the ”word processor“ before the deadline.

But this kind of idea is probably just too revolutionary. And before you all call me a crackpot, I will stop now.