Pussycats and BICCnight (Video of my Presentation)

Last Friday, the great day had finally come – it was the first BICCnight. Herr Stabl, managing director of BICCnet München had invited persons from the media and IT sector to come to the Bayerischen Rundfunk building.

Only the beer was not perfect. They served Beck’s. To be sure, it is the ”German“ premium brand of the international concern AE-InBev, which is the world market leader in beers. But we are in Bavaria! Consequently, we would have preferred a truly Bavarian Beer. 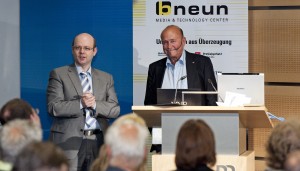 But, as we all know, in a tight corner even the devil will eat flies. So we indulged in Beck’s. First we drank the non-alcoholic version and later the real stuff.

Before the beer, however, I was allowed to give the last of three “impulse presentations”.The motto of the evening was IuK meets Media. Consequently, I really relished giving an overview of 50,000 years of IuK history and the origin of the media.

The first presentation was by Frau Prof. Dr. Gudrun Kinkel, who used a video (part of which is also available on youtube) to introduce innovations based on “augmented reality” (that seems the latest invention after virtual, merged und mixed reality).

Herr Klaus Illgner-Fehns told the audience about the extremely fast development of media, based on IuK technology. In his presentation, I found “TV as our electronic campfire“ particularly memorable. Herr Illgner had brought a suitable picture with him. It showed some young people sitting around the TV set. They were all rather busy looking at their notebooks and totally ignored the probably not very interesting program playing in front of their noses.

Well – and then it was my turn. Here is the video.

After the presentations, we had an enjoyable party with many good discussions and interesting contacts. And then I rode home through the slightly cool July night on my bike with Barbara. It was really very nice!

P.S.
I got the pictures from BICC (I do not yet know the name of the photographer) – and, as always, the video was recorded by Friedrich Lehn!