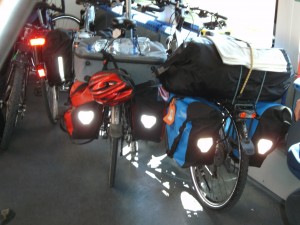 Another vacation. This time, we (Barbara and I) want to ride our bikes from Budapest to the Black Sea.

We want to go to Budapest and back by train. For the way out, we had planned to take the night train. However, it turns out this is not possible, after all, because the night train no longer takes bikes along. All direct trains (also the day-time trains) have stopped taking bikes. That means the slow service and change of trains twice for us, in Salzburg and Vienna. Considering this, the ticket is expensive, because there is a special offer if you take the direct super trains, but this special offer is invalid for the trains I have to take. That is our railway system for you: bikers have to suffer.

The slow service from Munich to Salzburg takes almost two hours. Time flows fast, but we are moved by what we experience: from Munich, we are accompanied by a no-longer-very-young gentleman who has just been released from prison. Through an Augustiner and 2 Jägermeister, he tells us a lot about his life. Alcohol, drugs, homeless… And then back behind prison bars, because he did not stick to his parole requirements. Regardless, he looks like a nice guy to us.

He is going to Austria, where it seems he also has a job. I wish him well. In between, he tells us that his predecessor in the cell is already 85 years old and can hardly walk any more. He threatened a neighbour with a weapon.

On arriving in Salzburg, we are met by a shocking surprise: the train from Innsbruck to Vienna is running late by 35 minutes. Our connection in Vienna for Budapest was to leave 30 minutes after arrival in Vienna!

The train attendants tell us to relax. The connecting train in Vienna is going to wait. To be on the safe side, I call our hotel in Budapest. They are terribly nice. We will not be charged … This is a relief in case we will have to spend the night in Vienna.

Now I sit in the train, on a nice window seat. It has stopped raining.

First test: my extended t-online connection works!!! And the new small Mac is even smoother than the Pro!

Now all that is left to worry about is my cold and the connection in Vienna – and then off we go from Budapest to the Black Sea!

RMD
(from the train to Vienna)
(translated by EG)