“Epikie on the Street” or “The Red Traffic Light and the Ticket!” 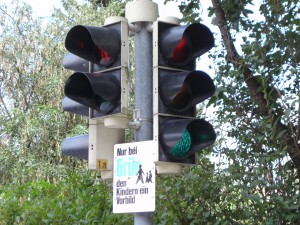 A short time ago, a good friend of mine was fined for crossing a street on a red pedestrian’s light with her bike. Two young policemen wearing civilian clothes had been on the lookout – and she was given a ticket.

According to the ticket, she crossed street a few seconds after the traffic light had turned from green to red.

She was not amused and initially wondered if she should file an objection. Knowing that this is usually in vain, she decided against it. Accepting her destiny, she said: “Basically, I might have deserved the ticket for having crossed streets where the traffic light was on the red position a hundred times over the years and not having been caught”.

In the future, she will not only pay attention to whether or not cars are crossing where she rides her bike, but also whether a couple of young boys wearing civilian clothes are lingering nearby.

It was a traffic light on a small street that is scarcely used and very easy to oversee. There was not a car to be seen anywhere and the traffic light had just switched to red.

According to the rules of Epikie (act like a sensible legislator would expect you to act), she did well. What legislator would expect a cyclist crossing a small street on a pedestrian’s crossing where the traffic light has just turned from green to red to stop on a rainy day, press the button and wait for quite a while until the traffic light switches to green again? And all this although there is no car to be seen anywhere.

Not to mention that she accepted the consequences of her transgression and paid the fee.

Incidentally, the usefulness of traffic lights in these positions is doubtful. Many years ago, when I was a member of the parent committee at school, we discussed whether a traffic light for pedestrians should be applied for in front of the school and kindergarten buildings. The policemen we had invited to join in the discussion were against it. Their reasons were as follows:

Statistically, the number of accidents after a traffic light has been installed at a pedestrian’s crossing on a street with not very high traffic, increases drastically. The children rely on the traffic light and no longer pay very much attention when crossing the street. Numerous car drivers, however, do not even notice the traffic light and just drive on, regardless of the red light.

That is exactly in accordance with my personal experience: it is often more dangerous to cross a street where the traffic light is on the green position than where it is on the red position.
Regardless of the advice, the traffic light was installed at the time. Incidentally, crossing the street has not become any less dangerous for the children.

Both the installation and maintenance of the traffic light cost a lost of money. I wrote about the cost of installing and maintaining traffic lights in another article some time ago: see the last few paragraphs in “Die 4-Ampel-Geschichte“.