BRD – Party Oligarchy and Whip System? A Criticism of Our Political Scenery. 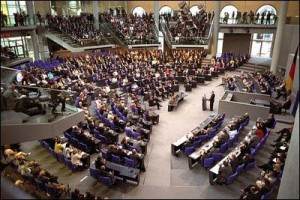 During the last years of his life (in the late 1960ies), the German psychologist and philosopher Karl Jaspers – who then became a Swiss citizen – concerned himself with the future of the Federal Republic of Germany.

In his last two books, he writes that the German democracy might well turn into a party oligarchy. This scenario gave him pause. I read a very interesting article of February 1983 by Rolf Hochhuth on this in the Zeit.

We recently discussed “how good are politicians” in the IF blog. In my personal opinion, this is the wrong kind of discussion. For us here in the Federal Republic of Germany, the problem is not “bad politicians”.

Rather, we have the systemic threat of party oligarchy. Over the years, it has slowly developed and established itself. By now, it has penetrated the entire social, political and economic life of this nation. That is exactly what Karl Jaspers warned us against. His two last books (I will mention one of them at the end of this article) are a must for every democrat.

Yet, both politicians and lobbyists think too little of the citizens.

Are the citizens really more stupid than the politicians?

This is another common prejudice among politicians. That is why they avoid uncomfortable subjects in order not to confuse the citizens. They also distribute gifts. The citizens take them, but refuse to act up to the bribery. Being so very scared of “direct democracy” is also due to this lack of confidence in the citizens. In my personal opinion, direct democracy is always a good idea. Just look at Switzerland. So:

The citizens are more prudent than the government!

Because, collectively, the citizens almost always have a clearer grasp of the situation and activities than parties and politicians believe. Consequently, they are prepared to accept harsh measures. Measures politicians believe to be unacceptable and therefore a threat to being re-elected.

Thus, politicians often consciously promote populist ideas in order to assure their re-election. Their concept of what the “common people” want is often totally wrong.

Germany is better off than anywhere else on the world.

Occasionally, I hear that we in the German Federal Republic – compared with other countries – are in a fortunate position as far as democratic culture and competence of politicians are concerned. That is why we should not continue criticizing our politicians all the time. There are many countries that are far worse off than we are.

But, as my friend Franz-Josef said: “If you wear the laurels on your bottom, then this is the wrong place”. We should not rest comfortably on our accomplishments, but instead do everything we can in order to get even better.

As I see it, we really have a lot of true “elite” in the positive sense of the word. I include among them politicians, entrepreneurs and teachers, along with many people in different jobs and roles.

Political opinions and striving for power.

In Germany, the political parties no longer deliver what it is their duty to deliver according to our constitution: helping the public to come up with an opinion. The preservation of power, career ambitions and populism are more important than the development of sensible programs. Thus, a thoroughly profound discussion of our values and the necessary re-thinking are hampered. So is the necessary social change in our time of (technical) developments.

To me, it seems that the whip system is a) unconstitutional and b) a real problem. People say that without it this country could not be governed. I refuse to be that pessimistic. Representatives of the people should always be permitted to give their vote independently and according to their conscience. The few ballots that were “without whip force” were those that ended with the best results.

Although much is quite nice in our country, there is still a huge potential for improvement. A conscious and continuing process towards a better state of affairs must be started.

And then I would like to see parties and politicians the highest aim of whom is not the preservation of their own power. Of course, that is difficult in a society where preserving one’s own property has become the dominating social value of (almost) all the citizens.

We all should reconsider what values are really important for us. And we must look upon our own selves critically. I hope that the internet can contribute as a platform for discussion and opinion forming in this process.

The book was first published in 1966 at R. Piper & Co, München. There is also a publication by “Deutscher Bücherbund”, Stuttgart, Hamburg.

P.S.
The above picture of parliament in session was taken on May, 31st, 2002. It was a special session where US president George W. Bush spoke in the Reichstag in Berlin. An employee of the Executive Office of the President of the United States took the picture for his own official purposes.

As a work of the U.S. federal government, the image is in the public domain.