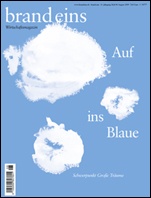 Last Firday, as I opened my post box, it was there: my August copy of brandeins. As you can easily see even from the outside, it is a little different from other magazines or business newspapers.

In the June copy of brandeins, the articles were about “What Really Matters – Focus on Identification“. In July it dealt with “Get Under Way – Focus on Stability”, and now in August, I read  “Into the Blue Distance – Focus on Great Dreams“. I like that, because I still have Great Dreams.

What you find inside is also about the typical entrepreneur’s dream.

The interview with Stephan A. Jansen (President and Chair holder at Zeppelin University of Friedrichshafen) on page 56 is quite interesting. It says: “After having stumbled, you tread more carefully“.

One sentence in the interview is: “If failure is forbidden, the principle does not work any more. Market economy suffers its greatest crisis if the state no longer accepts the possibility of a crisis.” That is a totally objective and down-to-earth statement. It really gets to the core of the problem.

Just as beautiful is the article on China and its communist party “The Great Fiction” on page 63.

Personally, I am very much in favour of the small articles and insertions, such as the always very emotional short interview (this time with a vintner in South Africa on page 12) or the “World of Numbers” on page 14 (I was going to publish something like that in the IF blog, but since it was already realized in brandeins, I decided against it).

However, the August copy contains a lot more that is worth reading. I will keep some of it for my leisure time on board ship during my next (short) cruise from Venice to Patras on August, 18th.

P.S.
Now some people might think evil of me and ask why RDM is advertising brandeins in such an offensive manner?
The answer is simple: after having given up hope on the masses of German manager magazines and economical weeklies, I discovered brandeins – and immediately became an enthusiastic follower of same. At long last, there is a team who write exactly like I and many of my friends think it should be done. This is the kind of concept I want to promote wherever possible. That is why I recommend all readers should say “Good-Bye Old World” and read brandeins!