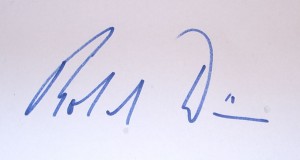 In former times, I often wrote letters. How very long ago that seems! It has been a long time since anybody received a personal letter from me.

It used to take a few days for conventional letters to reach their destination. You could never be entirely sure if they actually arrived at all. That is why we had special services like “registered mail”. This service was quite expensive and therefore only rarely used, just for very special purposes.

For short messages, you used postcards. They were less expensive. Nobody was very concerned about people reading the content of a postcard while it was on its way.

Federal agencies – not just in the Third Reich or in the GDR – used special techniques for opening, reading or photocopying letters and then re-sealing them so that the recipient was not supposed to notice they had been tampered with. Regardless of these practices, normal people never encrypted their letters.

Non-federal evil-doers, too, had a relatively easy time retrieving other people’s snail mail from their letter boxes. Even when we were students, we managed the trick whenever there was a notice from school to the parents. Our parents were not delighted. As you see, the snail mail was not really all that secure. The signature on paper did not make any difference, either.

It is easy to counterfeit a signature. All you have to do is get a model and practice a little. The recipient will hardly have a chance to discover the deceit. If, on top of this, the document is sent by fax or digitally, your game is even easier. A simple mount based on a scan will do the job.

You would not believe how many documents I signed over the last 25 years! Certificates, contracts, season’s greetings and much more. There must be 100,000 versions of my signature all over the place. What a dangerous world!
And I just remember: How often did I mislay my house keys without ever changing the door lock? And how often did I leave my car keys (or bike keys) lying around on my desk? Or how often did I hand my old credit card to an Italian waiter and just throw the yellow receipt away into a public rubbish bin? Or how often did I exceed the speed limit when driving my car? During the first years as a holder of a driver’s licence, I even went without buckling up. And just think of all the distance I rode my bike, initially even without wearing a helmet! And how many much frequented streets did I cross on foot when I was a child? And what about me swimming in the lake unobserved? And what about playing soccer. And much more.

Basically, I should wonder why I am still alive and did not suffer any serious harm either up to now. Except on some of my occasional visits to the doctor.

P.S.
I am already curious to see who will scold me (or shake their head about all this carelessness) for publishing my signature. Yet, somehow or other, there are quite a few issues that give me a lot more pause.
Consequently, I will continue my silent but not mute protest against the security mania of these days.

🙂 And I apologize towards all those who do not understand me for keeping up my anarchically provocative writings. Personally, I will just say that the reason is because I will always be a “child at heart”.