HITPC, the Manikin and the Rail Car

Today, I will give you a short insight into the past of InterFace!

At InterFace, there are always plenty of small items embellished with the IF logo. I believe it helps with creating identity – and I know that many enterprises highly esteemed by me do the same. Moreover, we, too, give our employees a nice Christmas present each year – of course one which also displays the IF LOGO.

As the years go by, quite a few items have been added to the list: the box of peppermint pills and the InterFace jacket, various kinds of mugs and dinnerware, even a pan for cooking Bavarian veal sausage, sports bags and clasp knives. 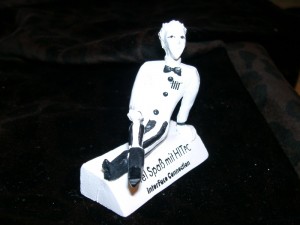 At one time, we had a small figurine. We called it the
“HITPC Manikin”

Our text system is not only available for UNIX, but also for PCs. Mind you, we are not just talking the German version, but also, for instance, the Russian (Cyrillic) one!

And as an extension to the UNIX-HIT-CLOU work benches, the HITPC was quite widely used, even with DOS. We designed the HIT-PC manikin especially for the DOS users. It always cut a fine figure on the then rather clumsy-looking PCs.

The beautiful advertising character made of plasticine (Plastilin) was designed by Hildegard Heidecker. She gave face and shape to our service idea. 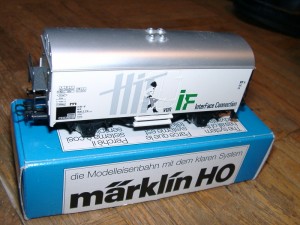 In those days, we also had an (original) “Märklin” rail car for InterFace Connection. It also showed the HIT PC manikin. The number of vehicles ordered was very limited (I seem to remember it was 200, but I am not quite sure) and we gave them to our customers and employees as a Christmas present.

The rail car also made it into the Koll-Catalogue (Koll-Katalog) for Märklin advertising characters and (is said to have) achieved a rather high collector’s value.

It all happened more than twenty years back.

P.S.
On the second floor of our building at Unterhaching – directly next to the reception area – you can admire a gold-plated HITPC manikin. Frau Heidecker gave it to us on our 25th anniversary! And, of course, you can also see one of the Märklin railway cars in my office.