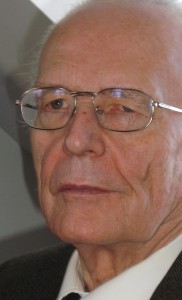 Rupert Lay was my mentor during many years of my life. As I see it, he was the most important of all my teachers. The first seminar of his I attended was in the spring of 1983, around the time of year we are now again in. For me, it was a totally new experience. Meeting him meant quite a fundamental change to my life.

When I was younger, my attitude towards seminars for personality promotion – as they were still called at the time – was a rather sceptical one. In 1980, I was lucky enough to attend a great seminar with Herr Uhlenbrock of TPM (Training Psychologisches Management) when I was working for Softlab. That took care of my scepticism.

In 1983, I attended a seminar by Rupert Lay. At the time, he was a Jesuit priest and the nestor for “Ethics and Management”. For us, he was discovered by Peter Schnupp, one of the Softlab founders. By chance, there was a vacancy for me in one of Rupert Lay’s seminars. Rupert was a celebrity! His seminars were extremely expensive and yet always full.

His three-day seminar was scheduled to take place at a rather less-than-friendly hotel near Frankfurt airport. The seminar was to start early in the afternoon. Having arrived with time to spare, I sat down in front of the hotel, enjoyed the spring sunshine and watched the people come and go. Also, I wondered what was to come next.

In front of the hotel, some very suspicious luxury vehicles arrived. All of them had drivers who opened their doors for and stored the baggage of important-looking people.

Then the time had come. Shortly before two p.m., I went to the conference room that said “Professor Lay”. There were seven of us. The six seminarists who I was to share the next two days with were the gentlemen from the great limousines. They were dressed in their executive best, whereas my attire was more the IT leisure look worn by software developers in those days.

Now the entire affair started looking a little ominous to me. And then came Rupert Lay. First and foremost, he familiarized us with the rules of the seminar. He exuded enormous authority. Nothing that was talked about was permitted to be repeated outside the room. Using the telephone during the three days of the seminar was discouraged, smoking was severely restricted, and alcohol was prohibited even during the evenings. Absolute punctuality was a matter of course. Anybody who did not abide by the rules would be immediately thrown out of the seminar. I felt like I was back in primary school.

Rupert started the seminar with an exercise on dialectics. The topic was freedom. It did not take long for my six fellow seminarists to come to a mutual agreement: freedom is the highest value of all. After a short discussion, they outstripped each other claiming how they would be prepared to sacrifice their lives without further ado at any time for freedom.

I did not feel like dying for anything, not even freedom. Besides, I had probably read too much Camus in my youth. Consequently, I seemed to believe that it might be possible to experience personal happiness even devoid of freedom if only you had enough inner greatness. I felt more and more uncomfortable.

Then everything changed. Rupert asked us to define the word freedom. Incidentally, all my fellow participants came up with was nonsense (even at this early time in my life, I was capable of seeing that). Nor did I know a good definition of freedom. At this time, however, I had decided not to do any talking during the seminar. Somehow or other, this entire affair looked quite ominous to me.

Until Rupert said rather drastically how stupid it was to say you wanted to die for something you were not even able to define. And that it is a pity if such people even had responsibility for others. My seminar colleagues – it turned out later that they were all managing directors of important enterprises and associations – were devastated.

And I felt a little better. Rupert said many things that could have come straight from my heart. At long last, I had met somebody – and such an important person, too – who was capable of formulating my own heretical ideas in a coherent and acceptable way.

It was sensational. I started to relax – it turned out this was the right seminar for me, after all.

A few weeks ago – after 27 years – Rupert was again speaking to us. He is now already over 80. And as in the old days, he gave a short presentation. Everything was like in former times. Rupert managed to say concisely and with simple words what there was to say.

For me, he was not just a great orator, but also the most important mentor. I have a lot to thank him for. He contributed considerably to the (hopeful) success of my life.

Next: Simon Grand    Back: Klaus-Jürgen Grün