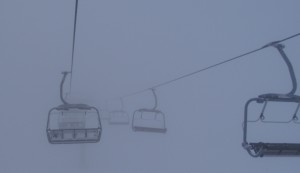 Once in a while, sometimes even during public speeches, entrepreneurs tell you how risky life is. Limitation of liability gets more and more lifted and the risk to be sued increases all the time for managers. Especially for entrepreneurs, the risk of personal insolvency is constantly moving up.

The media, too, join in by bombarding us with terrible reports. Mostly, if you look more closely you find they are wrong or turn out to be unreliable. Still, they give us pause.

I do not like this strategy of “making us afraid”. The future as such – not just for entrepreneurs – is already nebulous enough. And fear is the worst of all counsellors. This is a way to make it harder for emancipation from a world dominated by fear to succeed. Young founders, too, experience that. Hearing these kinds of reports makes it particularly hard for them to remain optimistic.

Whole industries do the best possible business with fear. And I do not only mean the insurance companies offering total security, regardless of the fact that it often is no help at all. Other industries, too, often make fear a marketing strategy.

Back to insolvency and liability. To be sure, I know quite a few people who had to declare insolvency for their private property. But mostly the reasons were that they miscalculated the tax burden. For example as self-employed persons, or by being extremely careless about very sensible rules, or by hoping to make a success of very dubious business ideas, or because of wrong speculation, or just because they were not able to manage money, i.e. spend less than they earn.
In my opinion, the increasing general lament among entrepreneurs (or would-be entrepreneurs) is just misplaced. Many people became rich because they founded an enterprise, and only a very small per centage of entrepreneurs probably became impoverished because of their enterprises. And they usually violated basic laws every upright and law-abiding citizen should know.

To be sure, founders should absolutely be told that they will have to face risks they will be confronted with as entrepreneurs (just like everywhere in life). But these are normal risks. You can arm yourself against them, just like you should be careful if you go out onto the street with traffic passing.

And there is always a risk that something bad happens. For instance, in the US death cells, it still happens that people die and later it turns out they were innocent. And in German jails, too, there are probably quite a few innocent people incarcerated. As you see, there is always the chance that you are hit by poor luck. You need not be an entrepreneur in order to be at the receiving end of poor luck.

Formerly, business partnerships with unconditioned liability were the commonly found kinds of enterprises. Yet we lament that today the liability laws are lifted. Basically, the cycle is back at its starting point.

Today, too, those enterprises where at least one of the active capital providers is personally liable are the ones that function best. Not only in the counselling sector. The reason for this is simple: the unlimited liability of entrepreneurs in business partnerships increases the degree of care and discipline.

Here is a humorous anecdote on fear of insolvency. When I gave my presentation at the University of the Armed Forces on entrepreneurship, most of the audience were soldiers. During the ensuing discussion, most of the people thought it very courageous and too risky to become an entrepreneur.

🙂 Well, I thought it takes a lot more courage to become a soldier. A soldier may well lose his life. I prefer the risk of insolvency.

P.S.
For more articles in my entrepreneur’s diary, see my Drehscheibe!