On waking up this Monday morning, Carl was quite content: again, Schalke had won! And they had played really well, too! Under Magath, things definitely were improving. Well, no surprise there. After all, he was a grinder, not a “Smileman – Klinsman“! Absolutely great! Now this was one good way to wake up after a weekend with thirty major-league goals. Or had it been a dream, as so often with Schalke?

Suddenly it struck him! 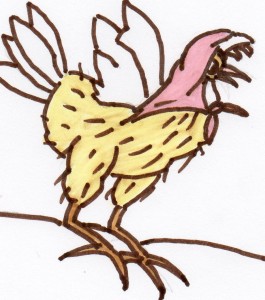 Oh my God – today there were two really important things he had to do! He had to pick up the pair of trousers that had been shortened and absolutely also his car from the repair shop!

After the second repair, the car was now definitely finished. Frau Lechner had called to tell him so on Saturday.
And the pair of trousers had been ready to be taken back on Saturday, too.
How could he have forgotten this?
After all, he really liked seeing this Turkish seamstress! She really looked great wearing her pink headscarf! No lie!
Now we need to get up, said an energetic Gerlinde. She quickly put on her trousers and pullover, and before Carl could turn around, she was already in the kitchen, making the typical noises.
Wow – how she started the day…
That was definitely not the right style for Carl – some way or other, he did not feel too enthusiastic today!

This was the fifth night he had not slept through.

And all this red wine last night!

Mind you, he had only drunk one bottle, and shared it all with Gerlinde, too. Strange …

But seriously: how to go about it today?

Should he go and pick up the shortened pair of trousers?

It had been with the “Red Headscarf” for the second time already!

The first time, the lady had been so busy smiling at him that she had never managed to put her measuring pins into the right places.

Well, it was not easy, was it?

There had really been a lot to take off – and, to make matters worse, his legs were not the same length. When he made the confession, she had said under her breath that the same was true for her own legs. To be perfectly honest, Carl would not have minded one bit looking and seeing for himself if this whispered secret was really true… And secretly, he even hoped that she might again not have taken off enough!

Or she might have taken off too much. It was all the same to him.

Even if, with all this cutting off, nothing but a thong-like pair of rest-trousers would have been left, it would have been fine by him. With global climate warming getting under way, the idea might not be a bad solution, anyway …!

He wondered if the sweet lady was going to want some money from him. After all, this was going to be the second time she handed him the finished pair of trousers.

Oh, yes – if she was again going to smile so that you could see the small bubbles of saliva on her snowy-white teeth, then he was quite willing to pay again. If necessary, he was even willing to pay twice as much…
Well – on the other hand, that might be a little over the top. If you looked closely enough, she already had a little acne. To be sure, not much of it, but still …

Carl turned around, wondering if it would be a good idea to go directly to the repair shop, carrying the pair of trousers over his arm. Or maybe it would be better if he first went home and tried them on. If, against all expectations, it was again too long, he could immediately go back to the nice head-scarf and pick up the car afterwards.

Or was it better to go to the repair shop carrying the trousers, let Frau Lechner hand over the repaired car and discuss the particulars of the repair job with her husband?

To be sure, he would look a little stupid carrying the shortened trousers over his arm all the time while talking with Lechner… Although, the trousers being black, it would not have been quite as obvious as if it had been of light colour, like had been the case with the one he had had shortened two weeks ago.

But it would really have looked strange, wouldn’t it? After all, he did not want to expose himself to ridicule… As everybody knew, Lechner liked to expand on the work he did on a car, sometimes even opening the engine bonnet or showing you the exhaust, which this time had been one of the issues!

To be sure, he could also leave the pair of trousers with Frau Lechner at the petrol station, then inspect the car and, before driving home, pick up the trousers again. As it happened, he had to fill up on petrol, anyway!
He was sure Frau Lechner would not have minded.

She, too, was quite nice – even though she did not wear a pink headscarf. She would not have looked quite as attractive in it as the sweet seamstress, anyway…!

However, if he did that there was the chance – he certainly had to see this quite objectively – that he would fill up on petrol as planned but then forget the pair of trousers. Which would mean that he would have to call Frau Lechner again, like last time when he had forgotten the bank card.

Well – so it would certainly be better if, provided he was going to decide to pick up the car carrying his pair of trousers, he put the trousers into the car before Lechner began with his explanations. And since, as I mentioned before, the trousers were black, they were not going to get soiled, as the light ones did two weeks ago, if he put them on the back seat.

Except – he would have to take the trousers out of the car on arrival at home, instead of forgetting them on the back seat …

It was really tragic!

The entire problem would not exist, thought Carl as he looked at the clock because he no longer heard anything from the kitchen which meant Gerlinde was apparently finished with breakfast, if he went to the repair shop directly after breakfast. He could pick up the car and then quickly go and see the seamstress and then go home. Of course, even then he would have to be careful not to leave the trousers in the car. But that was obvious, wasn’t it? After all, he was not totally stupid!

The cleanest solution, after all, was – well, said Carl as he sat up on his bed a little hesitantly – if he took no risks and first went to the repair shop to pick up the car, then take the car home and be on his way to the sweet headscarf wearer.  He just hoped she would be there, instead of her boss. As soon as he arrived there, he could try on the trousers and then carry them home over his arm. Of course, there must not be any rain. But that is something he could immediately check by pulling up the shutters!

Gerlinde called to say breakfast was on the table!

Carl called back, telling her that he needed a little more of a lie-in.

Somehow or other, he felt a little dizzy …

Perhaps, so he thought while again covering himself with the blanket, Gerlinde could pick up the car directly after breakfast? And tomorrow, when he felt better, he could get the trousers from the seamstress. That was definitely one job he did not want to additionally burden Gerlinde with.

Wasn’t there enough work for her already in the kitchen?

And with all the house-cleaning?

And all the work around the garden also took its toll on your spine. The least he could do in return was help her with the pair of trousers…

After all, he was not a barbarian, was he?

PS:
Incidentally, the next “Carl and Gerlinde” story will be online two weeks from now, on March, 24th, 2011.