When Carl stepped out of the front door, he shrank by half his height! 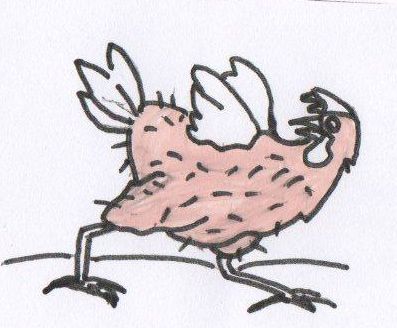 SoIt was so bitterly cold! Even colder than in winter. Mind you, we are talking September, when you could usually count on an Indian summer. This expectation had probably been the reason why Carl had not even bothered to close his bathrobe. So now he stood there barefoot in his “Birkenstock” slippers.

Was this now the beginning of cold rigor?

Carl had heard about this condition and consequently, following a spontaneous impulse, he already started to turn around and get the newspaper at a later time, when the sun would have found its way through the blanket of clouds.

After a short moment of contemplation, however, he made up his mind and – with heroic determination – hurried towards the letterbox, which was located a little down the driveway and covered with a thin layer of ice. He opened the letterbox, took out the folded paper, locked the letterbox and was going to go back into the nice and warm sitting room, when something made him hesitate: not far from the front steps, to the right, next to the shrub, near the old tree root that looked like an animal ready to jump its prey, a splendidly white egg caught his eye …

But was this really a hen’s egg?

Well, its size and form certainly looked like a hen’s egg, but how had this egg ever made its way under the root?
Where in the world would any hen lay an egg like this? Standing freely, sandwiched between two plants and without any other traces? If you looked a little closer, the bark mulch sitting quite close to this white egg looked a little disturbed. But certainly not like anybody could have thought that an egg-laying animal might have been building its nest around the place. Not to mention this murderous temperature, where any hen would have turned into a deep-freeze hen within seconds and probably have looked at him with a wide-open mouth and frost-rigid ice eyes…

But that is not what he saw. He only saw the egg sitting there under the root strangely sandwiched between two places. To be perfectly honest, he was not only surprised, he was even a little disquieted.

What to do with the egg?

Should he just leave it there, where some animal or clown had put it? Or should he take it with him? Or perhaps someone had intended to throw the egg at his house, like it had happened quite frequently in town in the recent weeks? As usual, the police had never been any help, because the inside of the eggs was faster to run down the wall than you could have called the police. Let alone wait until they had finally arrived and started investigating without success.

Well, Carl mumbled to himself while holding the white, cold egg in his hand and being both disgusted and perplexed, after all is said and done, you could find solace in the fact that nothing worse had happened to him than the fright. After all, we all know from TV and the newspaper that a lot worse could have happened, don’t we: you could read about atrocities and messes of totally different dimensions; messes where masses of people not only suffered damage, but even died, instead of just getting their houses thrown at with eggs, as had happened to him. Well, to be sure, in his particular case the egg had not even been thrown, thank God. He was sure the evil-doer had been disturbed by something – but it could have been thrown at his house! Maybe a car was just passing at the right moment. Who knows? Or perhaps someone strolled along the way walking his dog, which made the egg-thrower nervous and motivated him to let the entire egg attack look like a joke by just sandwiching the egg underneath the root and then making himself scarce.

On the other hand, it would have been quite possible for the egg-thrower to throw his egg. Maybe exactly at the moment when Carl was stepping out of his front door in order to get his paper. Then this thrown egg, which even got a little warm now as he held it in his hand, might have landed right at his head. The entire golden interior would not have been running down the house, but down his shirt! What a terrible idea!
He shook himself with disgust!

Carl thought it appropriate not to tell Gerlinde anything of this entire egg affair. After all, she already suffered from high blood pressure as it was and might have become agitated without proper cause. Instead, when she inquired where he had been all the time, he told her that the morning temperatures were so nice and fresh that he found it hard to go back into the house.

He coyly took his place behind the breakfast table and, as usual, hid behind the thick layer of newspaper …
Later, he clandestinely disposed of the egg he had been keeping nice and warm in his right bathrobe pocket. He cautiously put it into the biological waste on top of the other kitchen waste and was glad that it had landed there, instead of at his head.

On the next morning, Carl asked Gerlinde if, maybe, it would not be a good idea if she went and picked up the paper from the letterbox from now on. After all, she usually got up earlier than he did and was also mostly dressed, whereas he was still wearing his bathrobe?

Gerlinde was surprised, but consented! She said “If that is what you desire” and served him his usual white egg for breakfast …

This one time, Carl ate it. But on the next day, he declined.

And also on the following days. Nobody knew why and neither was he prepared to talk about it.

P.S.
Klaus is a nuclear physicist and privately very interested in philosophy. The picture showing the hen is also by him. Chapeau and I bow my head to him.