Carl had never liked the Advent! 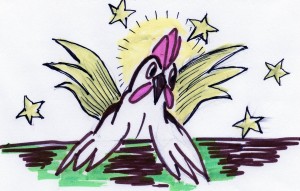 Least of all this leaden darkness.

There were days when you never seemed to see the light of day; it felt like the dusk started to invade the entire company early in the morning, chasing Carl through the entire building like an olm, until he encountered yet another one of those annual balance sheets to slave away on, since they demanded yet lower costs, higher order inflow and, of course, significantly better results than last year!

No, – Advent was not a nice time! It was more like the foreboding of hell …

For Gerlinde, however, it was always like getting a glimpse of heaven!

She loved this pre-Christmas time full of Christmas Carols so much that she, with an abundance of new ideas, converted Carl’s house into a fulminant ’Christmas Paradize Resounding with Christmas Bells’. Not only did dozens of Christmas stars reside and glimmer over the eight beautiful, illuminated mangers filled with expensive, hand-made members of the Holy Family and the Wise Ones from the Orient. On top of this, a constantly increasing number of singing Christmas Angels took over more and more of the entire regency…

That was exhausting!
Because whenever Carl, totally exhausted after one of his ’Advent Workdays’, wanted to collaps onto the sofa, he could count on some of those golden angelic nuisances snuggling so close to him that he immediately jumped up in a fit of panic and then made a cautious second attempt at folding himself up and squeezing into a corner of said sofa. And when he was fed up with all this and tried to put down his beer bottle, it would, of course, instantly land on a huge horde of chubby-faced putto angels. And even in the bathroom and on the toilet, dozens of small golden angels would grin at his exposed bottom…

Small wonder that, as he tried to find solace in his beer bottle, the occasional hand seeking the bottle caused some of Gerlinde’s beloved objects to accidentally get kicked onto the parquet flooring, where it disintegrated somewhat, thereby losing its angelic appearance!

But it was never ’All Nine of Them’, as Gerlinde later claimed. That accusation was totally over the top. After all, a small bottle of beer was far from an inspiration for him to play at scuttles, was it? Although sometimes he felt like it…

And neither was it Carl’s idea of a good joke that his Gerlinde looked daggers at him after each of her ’Fallen Angels’ – making him feel like he had committed murder. Because, if you looked at it realistically, those stupid hard plaster angels looked no worse without their noses than with. And those few golden, broken limbs immediately landed in the rubbish, anyway. So what was Gerlinde making such a fuss about? All she had to do was take up her broom and shovel…

But during the Advent, she certainly tended towards hysterical super-sensitive reactions. He had already realized that much. Or was it perhaps the early stages of menopause?

Once, she actually yelled at Carl!

Turning a deep purple, she was totally beyond herself and cried at him that what he did each evening was the purest Advent massacre; she could no longer cope with this provocative vulgarity; she was fed up; she finally was at the point of no return. If he thought he had to let out steam with her angels, why did he not buy his own angels and  – and she was so excited she could not even breathe properly any more – throw them against his beer crates down in the basement.…

At the time, she had furiously and abruptly disappeared into the darkness, her winter jacket still open and her scarf hanging around her neck. However, she did not forget to slam the house gate shut with such vehemence that even the racket juniper on the front lawn still trembled several seconds later.…

He had never seen such an outburst of fury from his Gerlinde! And in Advent of all times!

Totally disoriented, he sat for before the TV set with his beer bottle in his hand for several minutes, felt sorry for himself and absent-mindedly stared at the images slipping over the screen. Uneasily, he channel-hopped through all the 400 programs, but without Gerlinde sounding bitchy in the background, it was no fun …

Was it possible that these stupid angels actually had sent his Gerlinde running?

Determinedly, he emptied his beer bottle, topped it with two glasses of clear schnapps and quickly put on his fur-lined leather jacket.
Since he had no idea where to order his searching steps to go, he simply walked along the main road at the time, peered into every side street he passed and eventually took the turn towards the Catholic Church. Actually, all of a sudden the idea had occurred to him that Gerinde might perhaps be found here sobbing in front of the nostalgically illuminated Christmas Manger here on the church yard. …

While he already imagined himself cautiously sneaking towards her and bashfully clearing his throat, then trying to lead her carefully home amongst a thousand sweet apologies, he, unfortunately, had to realize that the only creature sitting in front of the manger was a rather dishevelled, white-grey tomcat. It ran hither and thither miaouing grimly. But at least there were no angels. Or had the tom eaten them?

When, finally, after more than an hour of planless straying and perspiring profusely, Carl passed the shopping centre that had been built just last year, he drew new hope: given the long opening hours, Gerlinde might well have decided to go shopping in one of the discount shops.

Well, there was plenty of activity all over the place, wasn’t there? People were carrying home material fit to see them through the next war!
And in all the crowd and throng, he actually spied Gerlinde. Apparently, she, too, had already seen him.

Determinedly, she walked towards him with two enormous shopping bags. She seemed to be in an excellent mood and smiled over her entire face – which looked good on her, because the cold night air had also freshened her satin cheeks in an appetizing way…

“At long last – there you are, Gerlinde. I was so worried!“ said Carl meekly but still with a bit of an accusatory tone.

“Yes, here I am“, beamed Gerlinde, “you know, Carl, when taking a walk, I suddenly remembered that this week there are unbelievable super-sales prices at “Adler“ …“

After some brief moaning, Carl nevertheless smiled bravely and took the angelic burden in the shopping bags from Gerlinde!

“But pray do not let them fall down“, she sweetly threatened him.

“And if I slip?“ Carl asked hesitantly.

“Then I will immediately turn around and buy the ’100-Angels-Lucky-Package’ for 500 Euros. They deliver it home  …“

“Oh my God“,  Carl softly moaned. This was the first time Carl wished he were himslf an angel and could just fly away …

PS
And two weeks from now, on Thursday, December, 1st, you will read “The Advent”.